Quarashi is returning for one concert this summer!  They have also recorded and released a brand new single!  Read more here:  http://www.thequarashivibe.com/2014/04/10/quarashi-returns-2014/

--------
Thanks to trallilalli on YouTube, you can now enjoy the full, official music video for Quarashi's "Switchstance", which must have been released sometime in 1996 (correct me if I'm wrong).


This is probably Quarashi's #1 rarest music video, so this is incredible. I thought I had done well by finding the "Baseline" and "Stars" videos before Anthology came out, but this tops my finds! 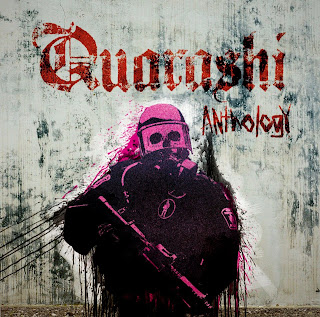 October 18, Quarashi released a 3 disc set, titled "Anthology". This is an official release by Quarashi, NOT A FAN-MADE compilation! The

set is made up of 2 CD's, and 1 DVD. The first disc of the set, will focus on Quarashi's 20 most popular hits. The second disc, will focus on rarities, demos, and b-sides. The DVD will have all the band's music videos, as well as rare concert footage, interviews, and other various clips.

Hard copies of Anthology will be released later this week and will be available for purchase worldwide. Also Courtesy of The Quarashi Vibe:

On September 12, 2002, Quarashi played one of their biggest gigs in Iceland. The concert was held at Laugardalshöll, an indoor sporting arena located in Reykjavík, Iceland. The entire concert was filmed, and you can watch the whole concert in its entirety over at The Quarashi Vibe, by clicking the picture above. Over at The Vibe, they even included the pre-show interview which was aired on Icelandic news TV, with English sub-titles!

*New music video from Tiny's band The Musik Zoo available to watch below!

Remember to bookmark / favorite the forums and visit often to check for the latest discussion!
---------


The Musik Zoo is an Icelandic rock/rap band that Tiny recently joined to be the lead rapper and possibly singer. Tiny has been kind enough to tell me he will send me more songs in the future, and with his permission I will pass along to everyone else.
------------------
New interview with Tiny up! Read the full interview here, by clicking on the 'Extras' page and then clicking the link, or go directly to it by clicking here - My Interview With Tiny. The interview discusses such topics as Tiny's first influences, how he joined the band, the Quarashi break up, and his current musical project (The Musik Zoo).
------------------
Watch our newest Youtube upload - The Making of the "Mr. Jinx" music video!
http://www.youtube.com/watch?v=dwvmpARVu7k&feature=channel_video_title
-------------------
Add the new, officical QuarashiMusic.blogspot.com Myspace and Facebook Group!!!